A documentary work-in-progress by Sheila Ganz 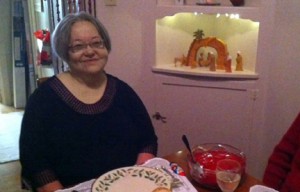 According to the recent National Institute of Mental Health study, one in four adults, approximately 61.5 million Americans, experience mental illness in a given year.  About 13.6 million live with a serious mental illness such as schizophrenia, major depression or bipolar disorder.  What these numbers don’t take into account is the toll it takes on parents and siblings, as they struggle to keep their family intact and get their loved one help.

The feature documentary GRAVELY DISABLED tells the story of Teresa Sheehan, a 59 year old Japanese American woman living in an single residency occupancy (SRO) in the Mission District of San Francisco.  In August 2008, Teresa was shot six times by a San Francisco police officer on what was supposed to be a simple transport to the hospital for a 72 hour hold, due to deteriorating circumstances in her capacity to care for herself.  She survived.  The film follows Teresa and her siblings’ fight for the rights of individuals with severe mental illness interwoven with advances in policy, practice and research that affirms dignity for all.